Is it Time to Go to a Dumb Phone?

Perhaps it is time to go back to a standard phone or whatever you want to call it. Does anyone sell a wireless phone that does only phone calls and texts and nothing else? Looking at Amazon, there are a few for sale, but most still have features to access the internet (not very good) and connect (usually through bluetooth) to other devices.

As a T-Mobile customer I know that if I got a dumb phone, my monthly bill would be significantly less at $20 per month with no internet. Of course I could get that now by not paying for the data portion of the service.

The point of this video is that our devices whether or not you are on iOS or Android, is watching and logging you wherever you go and often on whatever you do. Do you find this creepy? I do.

Granted I like Google services. I use Google Search, Google Voice, Google Docs, Google Maps, Google Music. Gmail and more. Perhaps the best way to use it without being location tracked is to use Google only at home on your computer.

And as they say in the video above, turning off your phone or tablet may be the way to go if you need to keep the smartphone.

I’ve been a longtime user and subscriber to Flickr. I’ve seen Flickr go through several, often upsetting changes over the years. Acquisition by Yahoo.com. Sold off by Yahoo to Verizon in 2017. And now acquisition by SmugMug. And that is only ownership changes.

Flickr has gone through many interface changes over the years – several of which I did not like. They include the major departure from the original Flickr layout in 2010, layout changes again in 2013, and more recently the addition of the camera roll, automatic tags, elimination of the daily calendar view of posts, and the loss of embedding slideshows into our blogs and websites.

Flickr still allows users to embed individual photos to blogs at various sizes. I hope that this continues and that the embed codes don’t change. This item in their FAQ is of concern:

Over time, we’ll be migrating Flickr onto SmugMug’s technology infrastructure, and your Flickr photos will move as a part of this migration—but the photos themselves will remain on Flickr.

I have way too many of my photos embedded into my blogs and websites. It will be a lot of humbug if the links and embed codes would change.

What I do like about my current Flickr despite the changes above and up to yesterday’s acquisition by SmugMug include:

Here is what SmugMug + Flickr says about free accounts:

Flickr’s free accounts are foundational to its community of influential and engaged photographers. We are not making any changes to Flickr plans or rates at this time. We’ll let Flickr Pro customers know if that changes.

One can be cautiously optimistic about this, but I don’t like the the possibility that “we are not making any changes” part of the statement. Right now they can say all the nice things to alleviate users from bailing on the service. But what does the future hold?

That all said, while I love the free one terabyte of storage, I had upgraded to Flickr Pro (their paid service) many years ago. That was good considering how many thousands of photos I have there.

One last thing about that name. SmugMug? Something about it disturbs me.

Perhaps with this acquisition we can be cautiously hopeful that something good for photographer/users will happen. We’ll see. 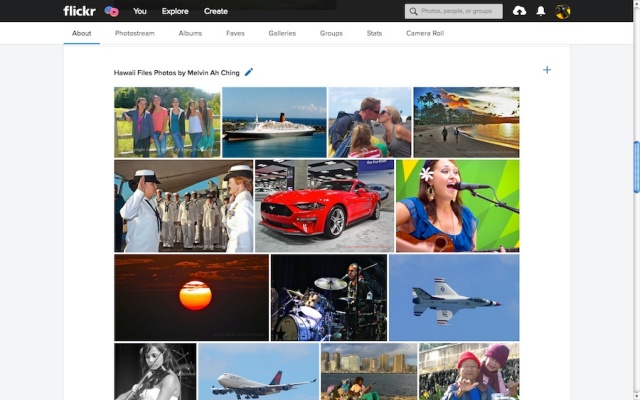 I’ve long been a user/member of the streaming mix site 8tracks.com. The service put a one-hour cap per day on free streaming in 2016. Today the streaming limitations were lifted and now anyone can listen to audio streams on 8tracks.com whether or not they are a member.

Audio streams have advertising commercials inserted into them. For those who want an ad-free experience, can opt for the paid service know as 8tracks Plus.

8tracks streams on the web as well as through their Android and iOS apps.

Here is the letter users got in email:

Thanks to our much-appreciated 8tracks Plus subscribers and the recent introduction of new audio ads, we’re beyond excited to say goodbye to the loathed weekly free listening limit for people in the US. Now, listeners can stream 24 hours a day, 7 days a week, 52 weeks a year, all for FREE!

And it gets even better; the 1-track limit for logged-out listeners has also been removed, so now when you share a mix with friends, they can hear the entire thing right away. We promise this isn’t some cruel joke; go ahead andshare any of these mixes with a friend to see for yourself!

We’ve faced lots of challenges over the past couple years, but with the help of our community, we’ve been able to make excellent progress towards overcoming each obstacle. It’s truly a fact that 8tracks exists because of you – the avid DJs, investors, and listeners responsible for it all.

And the fun is just getting started! We have a newly-released Spotify integration, an upcoming Alexa integration, and a bigger, new music library on the way which will eventually support mix-making in our mobile apps.

To see more of our upcoming projects and be an active part of 8tracks’ future,join us here on Wefunder where we’re about to launch a new crowdfunding round which will allow investors to own shares in 8tracks and receive a lifetime upgrade to ad-free 8tracks Plus. Over $100,000 worth of shareshave already been reserved by 400+ investors since our Wefunder profile opened last week.

Boom! Here it is. Just like that I changed the name of Mel’s Macintosh Universe Blog into Mel’s Tech Blog. So easy to do with WordPress.

Going forward this blog will be more of a general information and commentary site covering a wider range of techie stuff. I’ll still write about Apple, Macs and other devices. However I’ll probably cover different things such as Chromebooks, Android, Google, Photography, Audio & Video plus the always evolving Internet.

With that said, I’ve made changes to this blog and more will be coming soon. I will also be changing the blog’s URL in the near future too. In fact you will be able to soon visit and bookmark the following URLs for this blog: tech.scoomba.com, and mtb.macprohawaii.com.

Once again I round up a list of ten Apple products that I did not get or wanted this past Christmas season.

As I stated last year, my enthusiasm for Apple’s line-up of products have definitely waned since the days of my Mac Plus through the years using many other Macs such as the Quicksilver G4 and iBook 400. My two aging MacBook Pros are daily drivers that serve me well in various capacities. I hope these computers last several more years as primary devices.

I bought into the iPods but in recent years have become disappointed in them not because they were not great devices, but mainly on the fact that their built in batteries are almost impossible to replace. The batteries die and I can’t take advantage of all the portability they were intended for. Instead I still use the perfectly capable iPods plugged into their chargers and USB ports as semi-permanent audio players attached to external amplification systems.

The only iPod that still works as intended is my 2014 iPod Classic.

The iPod Touch that I bought in 2010 that I so loved is slowly giving up the ghost. The battery holds a charge for less than a couple of minutes before it completely dies. 32-bit apps are no longer supported by Apple and several apps that I have installed on the device do not fully function as their publishers have moved on and don’t support them. This mainly applies to apps that access the internet. Lastly I have noticed a light gray mark in the background of the iPod Touch’s screen indicating that it may soon die.

Truthfully as portable devices (phones) go, I have mostly migrated to Android because their devices are cheaper. The three phones (only one active with a carrier) I have feature easily replaceable batteries that no iOS device ever had.

That said, if I were getting or wanted an Apple computer or device, these are the 10 that I would consider but for various reasons did not get this year.

And there we go. As 2017 closes out into 2018, these are the Apple products that for better or worst I totally skipped (again) and opted to hold on to tried and true or actually go in other directions (Hello Chromebook and Android).